Tom Tanaka (田中 トム, Tanaka Tom) is an old friend and senior of Shizuo Heiwajima. He works as a debt collector and is Shizuo's current employer.

Tom is usually seen walking around in a suit, but his striped, unbuttoned shirt and his dyed, dreadlocked hair prevent him from looking too formal. This is probably due to his job as a debt collector, which requires him to look sharp and businesslike without seeming too polite and friendly, as he often confronts people.

He generally has a reserved, laid-back personality, and as harsh as one might expect an underground debt collector to be, he is usually calm, even when confronted with Shizuo's destructive rampages. He is one of the few able to calm Shizuo down and make him stop fighting without angering him and incurring his wrath.

Tom and Shizuo met when Shizuo was entering middle school. Dengeki Magazine included an omake story that expanded on their middle school history. Some older kids tried to pick on Shizuo but were soon beaten up, and Tom approached with the following goals: a.) learn how not to piss Shizuo off (and thus graduate in one piece), and b.) enlist his help in moving the injured seniors to the hospital. Tom bought Shizuo dinner and advised him to dye his hair blond so to help cultivate a reputation and fitting appearance that would keep punks away. Later, the senior delinquents praised Tom for taming "the rabid dog" and asked him to enlist Shizuo as a combatant for them. Tom refused, reprimanding them for calling Shizuo a dog and for disregarding his hatred of violence. After Tom left, the seniors planned to attack him to trap Shizuo; unfortunately for them, Shizuo had been drowsing nearby for the entirety of the conversation and at that point attacked. The seniors cornered Tom, who held his own just barely until Shizuo arrived and took over. When asked by Shizuo why he, who couldn't fight well, didn't just use Shizuo, Tom answered that although he's not good at fighting and Shizuo is, Shizuo hates violence, so he should not fight.

After that, Shizuo dyed his hair and enjoyed a peaceful period as his reputation kept triflers at bay. Tom and Shizuo parted to attend different high schools, and Izaya Orihara undid all of Tom's work. Much later, when both of them were adults, Shizuo was having trouble keeping a job. Tom met Shizuo on the street and decided to hire him as a bodyguard.

Thanks to the fact that Tom is able to control Shizuo, and Shizuo's strength and destructive tendencies are actually a good quality to have in his line of work (instead of problematic like they were for his previous employers), Tom became Shizuo's permanent employer. Shizuo's job is to "basically beat up people who can't pay up," and generally to stay around Tom, protecting him. Tom has also made it clear that Shizuo doesn't need to beat everybody up, the idea being to use Shizuo's name and reputation to scare people into paying their debts. Shizuo, unfortunately, does so anyway.

Tom is seen working with Shizuo, collecting money from various people around town.

Tom is approached by Shuuji Niekawa to set up with an interview with Shizuo Heiwajima for an article in the tabloid Tokyo Warrior. Tom attempts to warn Shuuji to not anger Shizuo at all, exceedingly stressing the point. Unsurprisingly to him, though, Shuuji does provoke Shizuo, and Tom manages to distract Shizuo and calm him down before he further injures the reporter.

Tom is later seen heading to Takashi Nasujima's house to collect the money he owed, accompanied by Shizuo. When Takashi does not answer, Tom leaves the task to Shizuo, who easily breaks in and incapacitates Takashi when he attacks.

Tom and Shizuo take a break at a local park as they are out doing their rounds when they witness the confrontation between the Russian assassin known as the Murder-Machine Philosopher and the serial killer Hollywood. When the Russian makes the mistake of grabbing Shizuo's briefcase to use as a weapon, Shizuo attacks the two killers, believing them to be thieves. After Shizuo gravely injures Egor, Tom approaches the fallen man and gives him his sympathies and warns him to not to cross Shizuo.

A few days later, Tom is approached by members of the Toramaru who question him on which local gang runs the area. After Tom lists off a couple gangs, the delinquents ask where they could find the groups to fight them. Tom advises against the action, bringing up how their leader Chikage Rokujou would not approve of it but unintentionally ends up angering the men. Shizuo and Tom had planned to ignore them and walk away, but the men strike Shizuo, cutting his bartender clothes.

Tom and Shizuo are eating lunch at the Sunshine 60 Street Lotteria when Tom notices a little girl glaring at Shizuo through the window. Shizuo goes outside to see what business she has with him, and when Tom follows, he sees the girl pull a stun gun on him. The action causes a commotion, and Tom prompts Shizuo to make a run for it before the police arrive, but the girl latches onto Shizuo. The two retreat to Shinra's apartment for help with the girl accompanying them. After Tom and Shizuo explain what transpired, Shinra checks on the girl, who has a fever and falls unconscious.

Tom and Shizuo stay at Shinra's apartment for the night and wait for the girl to regain consciousness. Once she does, the girl introduces herself as Akane and explains why she was targeting Shizuo, having been deceived by Izaya Orihara to believe Shizuo was a hitman. Shizuo manages to keep his cool and reassures Akane that there was a misunderstanding between them before leaving with Tom. In the elevator, Shizuo asks Tom to tell their boss if he gets arrested for killing Izaya to have him give a statement that he was fired the day before so the company would not be affected by his crime.

Later that day, Tom meets with Shizuo after the incident of Shizuo being framed for murder and chased by the Awakusu-kai cleared. He tries to ask Shizuo the details of the matter, but Shizuo informs him he is sworn to secrecy, and Tom, not wanting trouble, accepts this answer without question.

The next day, Tom and Shizuo continue with their errands and visit Sugawa's house to collect money from him. Tom tries to peacefully extort money from him, but the man instead tries to have Shizuo pay for him, threatening him by mentioning his brother. Aware what will inevitably happen, Tom retreats down the apartment steps and waits for Shizuo. Afterwards, Tom reprimands Shizuo and suggests methods for Shizuo to intimidate the men without resorting to violence. They drop by Russia Sushi for a meal, and as they sit down Tom takes notice of a new worker at the restaurant. He asks the owner Denis who she is and how to compliment her in Russian but fails in flirting with her. After the exchange, Denis asks them if they would not mind having the woman - Vorona - to help them out with their work.

The three leave Russia Sushi and as they head to the next client's house, Tom explains to Vorona the kind of work they do and gives her some advice. When they arrive at the apartment, a man opens the door and beckons his fellow thugs to come out and gang up on the three, however, Vorona swiftly beats down the men before Tom and Shizuo could do anything. The three continue to visit other homes with Vorona incapacitating their combative clients.

They stop at the Kishimojin Temple in Ikebukuro for a breather, where Tom and Shizuo chat with her on her abilities and her connections to Simon and Denis. As they are talking, Akane, Mairu, and Kururi show up and greet Shizuo. Tom instructs Vorona to wait with the other girls while he and Shizuo handle the next client. When they return, they see thugs running away from the temple. Tom walks up to the women to overhear Akane yelling at Vorona to lay off Shizuo. Tom is confused but does not ask for an elaboration, ultimately deducing Vorona is interested in Shizuo as someone of the opposite sex. 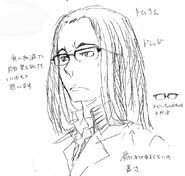 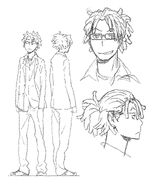 Character sheet from the Durarara!!x2 Shou episode 4.5 bonus booklet
Add a photo to this gallery

Retrieved from "https://durarara.fandom.com/wiki/Tom_Tanaka?oldid=36752"
Community content is available under CC-BY-SA unless otherwise noted.