Saburo Togusa (渡草 三郎, Togusa Saburō) is a member of the Dollars and is usually seen with his close friends in the van gang. He drives the van the group is associated with and is extremely protective of it. He is also a huge fan of Ruri Hijiribe and is one of the three vice presidents of the Ruri Hijiribe fan club.

Saburo has sharp brown eyes and chin-length brown hair parted down the middle. His normal attire consists of a white collared shirt, a dark red vest, jeans, loafers, and a chain necklace.

For the most part, Saburo is a fairly laid-back individual. Like his friends, he is always willing to help others in need, although he usually waits for Kyouhei to extend the offer before doing anything himself. He also shares Kyouhei's second-hand embarrassment for Walker and Erika's open obsession with anime and manga. Saburo's most noticeable characteristic is his strong attachment to his van, as he is shown to fly into a rage should it be damaged in any way (intentional or otherwise). Saburo's love for his van is seconded only by his love for Ruri Hijiribe, whom he idolizes to the point of tearing up at her concerts.

According to his brother Jiro, Saburo was a bit of a fighting addict in his youth, but has since calmed down due to the influence of Ruri and Kyouhei. That said, he can fall back into his old ways if something happens to them or his van. On one occasion, he nearly killed a man for damaging Ruri Hijiribe memorabilia in his van until Yahiro Mizuchi stopped him.

Unsurprisingly, Saburo is a very proficient driver, being able to hold his own in several car chases without suffering much damage either to himself or his vehicle. He is also a decent fist fighter, as shown during the big brawl at the end of the Yellow Scarves Arc. He is skilled enough to fight off five men at once during an ambush.

Not much is known about Saburo's life before the start of the series other than that he attended Kushi High school in his youth. He attempted to challenge Kyouhei to a fight, due to rumors of him becoming leader of the delinquents after Shishizaki graduated and to get revenge for a member of his school who was beat up by Shizuo. Before the fight could begin, he is ambushed by Purple Gamble members. While he managed to beat five of them, the other six overwhelmed him. Fortunately for him, Kyouhei showed up and defeated the other six gang members. Saburo would fight Shizuo months later, and was thoroughly defeated. Eventually, Kyouhei took Erika and Walker under his wing and the four would regularly hang out together, even joining the Blue Squares at the same time, although Saburo expressed disdain at the gang's leadership. After Saki's kidnapping pushes Kyouhei too far, Saburo agrees to rescue her without a second thought. After the Blue Squares dissolve, the group eventually joins the Dollars when Kyouhei receives an invitation online. Saburo makes friends with an immigrant named Kaztano, who makes a living selling tickets for various events. Their friendship is so strong that Kaztano sets aside Ruri Hijiribe concert tickets for Saburo even for sold-out shows.

After receiving an odd text from Kaztano, the van gang pays a visit to his apartment to find the place ransacked. They realize that Kaztano has become the latest victim in a recent string of kidnappings. Saburo is distraught by the loss of his friend, believing him to be gone for good, but Kyouhei assures him that they will locate Kaztano, no matter the cost. The group tries a variety of methods to track them down, even hiring Celty Sturluson to track down the vehicle with the license number Hashim provides.

The group eventually finds one of the kidnappers, Kanazawa, passed out on a pile of garbage. Kyouhei uses Kanazawa's phone and impersonates him to get the location of the kidnappers' meeting place. Saburo and the others confront the kidnappers directly, however, the sudden appearance of Celty causes the kidnappers to panic and run away, releasing Kaztano in the process. The group gives chase regardless, as they wish to uncover who is behind the recent string of kidnappings that have been taking place. They capture the kidnapper's leader, Asanuma, and have Walker and Erika grill him for information while Saburo, Kyouhei, and Kaztano wait outside.

Days later, while the group is hanging out together, a car accidentally scratches Saburo's van by knocking a pebble into the windshield. Saburo immediately gives chase but stops just before hitting an escaping Mika Harima. The group takes her in and posts about it on the Dollars message board, hoping to find some answers. Mikado Ryuugamine, who at this point has pieced together the mystery about the kidnappings and it's relation to Yagiri Pharmaceuticals, contacts them about a plan to expose the whole thing. Saburo drops Kyouhei and Mika off at the specified location and waits with Walker and Erika for the plan to take effect. After everyone's phones begin ringing, Saburo marvels at the sheer size of the Dollars' first meeting.

Saburo and the others are seen driving around the city, looking for info on the Slasher. The notice Anri Sonohara being followed by a strange man and decide to investigate. When they see that Anri is about to be attacked, Saburo immediately runs him over with the van on Kyouhei's order. Miraculously, the attacker, now believed to be the Slasher, survives and continues to fight. Celty and Shizuo Heiwajima arrive at that time, which causes the Slasher to become even more excited. Shizuo decides to end the fight once and for all by, much to Saburo's despair, ripping off the van door and slamming it into the Slasher, incapacitating him. After Shizuo leaves, Saburo and the others attempt to interrogate the Slasher but finds that he has no useful information. With nothing else to gain, the group ties him up and dumps him off at a nearby park. After the Slasher incident passes, the groups buy a new door for the van. Locating a new door is left to Walker, however, and it has a large design of an anime character on it, which causes no end of embarrassment for Saburo.

Saburo joins the other Dollars members at the end who are asked by Kyouhei to infiltrate a Yellow Scarves meeting. When Kyouhei gives the signal, the warehouse erupts into a huge brawl as the Dollars strike out against the former Blue Squares. When they take the upper hand, Kyouhei has Saburo take Masaomi to Raira General Hospital.

Saburo picks up Kyouhei, Erika, Walker, and the Orihara twins. Members of the biker gang Toramaru begin chasing them and Togusa speeds away as fast as he can, his van taking several hits in the chase. They stop to save Mikado, Anri, and Aoba from the Yellow Scarves remnants and the nine of them continue their escape from the biker gang. They eventually come across Celty who brings, even more, Toramaru members after them, and soon after the motorcycle police join the chase.

When they reach an overpass, Celty tells the others to run while she holds off the biker gang. After Saburo and Kyouhei drop the students off at the police station, the van gang heads back to give Celty a hand. They find their assistance unnecessary, however, due to the intervention of Ruri and Egor. Afterward, he attends the hotpot party at Celty and Shinra's with everyone else.

Saburo is hanging out with the others until Kyouhei notices Chikage tailing them. Kyouhei tells the others to leave while he dealt with the situation.

When Masaomi asks them to join the Yellow Scarves Saburo didn't say much. After Masaomi left Denis threatened them that if they talked about dangerous stuff he might throw another knife at the wall. Saburo then started to freak out because of Denis's threat. Later Saburo was looking at poster of Ruri when Kyouhei's father calls him telling about the hit and run Kyouhei was in.

He notices the wounds on Yahiro and is shocked to learn that he fought Shizuo. 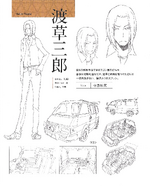 Season two character sheet
Add a photo to this gallery
Retrieved from "https://durarara.fandom.com/wiki/Saburo_Togusa?oldid=36746"
Community content is available under CC-BY-SA unless otherwise noted.