Volume 4, Prologue
Ruri Hijiribe (聖辺 ルリ, Hijiribe Ruri) is a popular celebrity and idol. After her family went bankrupt following the collapse of the family business, Ruri became a makeup artist and was in charge of Kasuka Heiwajima's vampire makeup in his debut film Vampire Ninja Carmilla Saizou. She later became a popular idol, starting out as a model for cosmetic products before moving on to show business. As a serial killer, she is nicknamed "Hollywood."

Ruri has been called "cute," "beautiful," and "hot" by a large number of individuals ranging from Celty Sturluson to executives in the Awakusu-kai. It is stated that her features are somewhat Scandinavian and that she projects a graceful, melancholic aura that makes her appear weak. Ruri has long black hair that extends past her shoulders and usually wears a dark red jacket over a simple black dress and black knee-high socks and sneakers. Her skin tone is fair and she has dark-colored eyes and her most distinctive accessory being the length of ribbon she wears on the top of her head that is tied on either side, usually orange in color but she has been shown to wear a red one, She is also rarely seen smiling, always having a perpetual frown and her expression being mostly blank.

Because of her quiet, eerie aura, she is usually cast as characters with very dark, weak, or introverted personalities when she appears on TV. It is widely believed that she isn't very athletic since she never takes part in sporting events on-screen and has even mentioned her own lack of physical coordination on talk shows, but she did well in track when she was a child, which leads some to think that her melancholic personality is an act to increase her fanbase.

Ruri is a huge fan of monster movies and slasher films. This is mainly due to her very strict upbringing when she was younger, as she admired how freely monsters and villains acted, unrestrained by morals or social etiquette.

Being 1/4 dhampyr, Ruri has incredible physical strength, speed, and endurance, which she uses to her advantage as she begins her plan for revenge. As "Hollywood," she is known for leaving her victim's bodies in a near unrecognizable state, with the head and limbs being the only parts that remain untouched. Ruri also possesses extraordinary healing abilities that allow her to survive otherwise fatal blows. However, compared to other supernatural characters in the series, Ruri's strength is still fairly low, as even normal humans with sufficient training, such as Egor, are able to stand against her. Additionally, despite her brutal method of killing, Ruri is actually sickened by her own actions, only able to muster up the stomach for it against those who were responsible for torturing her. As such, she is rarely ever seen in direct combat.

As a child, Ruri was bound by rules and restrictions on her behavior due to her family being very wealthy and concerned about appearances. She was rarely ever allowed to express herself, and always within the bounds of social etiquette. Because of this, Ruri was drawn to horror and monster movies, not because of the violence, but because of the characters who could express themselves in ways that she wasn't allowed to.

Over the years, Ruri's family went bankrupt due to bad investments. Now free to do as she wanted, Ruri took up an apprenticeship as a special effects makeup artist under her teacher Tenjin Zakuroya. She gained critical acclaim for her work on the series "Vampire Ninja Carmilla Saizou" and was scouted by the talent agency, Yodogiri Shining Corporation under Kasane Kujiragi. Her career expanded to include modeling, acting, and singing, and Ruri quickly became a popular idol. However, the company president, Jinnai Yodogiri, began using her for strange purposes. Ruri was used occult rituals that had the company's investors cut her body and drink her blood. However, Ruri was unable to do anything under the threat that her father would be murdered if she told anybody. When Ruri searched online for her father's whereabouts, she was given a free tip from Shinichi Tsukumoya that he had actually been killed by Yodogiri's men three years ago. Filled with anger and bloodlust, Ruri escaped and took up her persona as the serial killer Hollywood, using various movie monster costumes to hide her identity. Her victims were the men responsible for her abuse and the participants in the bloodletting ceremonies.

Ruri first appears dressed as a zombie having a fight with Egor, a Russian assassin hired by Nebula to capture her, in the middle of a public park. Unfortunately, their fight drags Shizuo Heiwajima into the crossfire after Egor attempts to use a briefcase Shizuo was guarding as a weapon. Shizuo mistakes the two combatants for thieves and uses a park bench as a weapon, destroying Egor's face and knocking Ruri out of the park. A small group of Nebula employees attempts to track her as she sails through the air and eventually crashes in front of Kasuka Heiwajima's car. Having seen the news reports and examining her costume, Kasuka deduces that Ruri's identity as the infamous Hollywood and that his brother is most likely responsible for Ruri's injuries. Feeling responsible and, upon noticing the Nebula personnel closing in, Kasuka opts to take the injured idol to his apartment.

Ruri then wakes up in Kasuka's apartment with Shinra exclaiming at how quickly her wounds healed and asking for an autograph. After Shinra is called away by another client, Ruri asks Kasuka about why he decided to help her and not call the police. Kasuka replies that he thought it would be best not to get the authorities involved if Ruri were indeed Hollywood. Ruri slams him down on the bed, asking if he had even considered the possibility of being killed.

Kasuka questions Ruri's motives for killing him, pointing out the security cameras littered throughout the building. Ruri asks Kasuka what he would say if her motives were simply to kill him for no good reason, and he replies that he simply doesn't want to die, wearing the same expressionless face he always wears. Kasuka also states that if he were to die, his biggest regret would be keeping Ruri from crying. After hearing Kasuka state that he went into acting to express himself to the fullest, Ruri breaks down and starts to cry, realizing Kasuka had the same desire she had but was going in a completely different direction. Where she was a human who wished to become a monster, Kasuka was a "monster" who wished to become human.

After regaining her composure, Ruri thanks Kasuka for saving her, and the two discuss Kasuka's plan to get her out safely, as she is being tailed by Nebula employees. Kasuka purposefully leaks information about himself online that lures several reporters to his apartment. He and Ruri step outside and kiss in order to attract the attention of the paparazzi before escaping in Kasuka's car. Kasuka hires Celty to take Ruri back to her hotel, and as she is transporting the disguised Ruri, she gets a strange, yet familiar, vibe that makes her think that Ruri isn't exactly human either. The two form a small bond on the ride over, and Celty willingly reveals to Ruri that she is headless. In her apartment, Ruri is relieved and exhilarated to learn that even abnormal people like Celty can find happiness, believing that she can, too.

Later, back at her apartment, Ruri watches the news and sees Celty being chased on the highway by people seeking bounty on her. Ruri grabs a headless knight costume from her studio and rushes to the highway, helping Celty hold off the attackers. She is also surprised to see Egor there, who is under the control of Saika. The two fight alongside each other, allowing Celty to escape with Kyouhei and his crew, who are protecting Mikado, Anri, Aoba, and the Orihara twins.

Several days later, Jinnai Yodogiri goes missing and Ruri switches to Kasuka's talent agency, Jack O'Lantern studio. She intended to tell Kasuka everything about her past before killing herself, though Kasuka sees through her plan and refuses to listen, saying he doesn't want Ruri to die yet. The two become an official couple.

Ruri is on the run after a stalker burns down her house. She flees to Ikebukuro with Kasuka, who asks his brother Shizuo for help in the matter. The stalker is being fed information through the Dollars, and the three go to see Celty at her and Shinra's apartment to ask her for more information about the gang. Meanwhile, the stalker, Kisuke Adabashi, is being directed by Jinnai Yodogiri to find and capture her. His father was one of the men who participated in Ruri's bloodletting ceremonies and was killed by Hollywood, and he had become enamored with the idea of her. He knows that she is far stronger than he is, so he is stalking her for the chance to become closer and destroy the things she loves best.

Kasane saves Ruri when she is nearly run over by Kisuke. 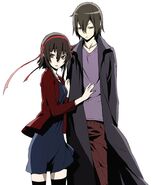