Volume 1, Prologue
Namie Yagiri (矢霧 波江, Yagiri Namie) is the former chief of Yagiri Pharmaceuticals who currently works as Izaya Orihara's secretary and she possesses Celty Sturluson's head before she is forced to hand it over to Izaya in exchange for protection.

Namie is a curvaceous young woman with brown eyes and long dark brown hair that she wears down. Her facial expression is usually stoic or angry.

She wears a long white lab coat over a dark red mini skirt, black tights, and a green turtleneck with a lighter green ribbed neck and sleeves.

Namie is portrayed throughout the series as a direct and strong woman - she works hard to get what she wants, and no matter what, she will get it. Her personality is seen as very demanding and cold, and she only ever shows kindness and gentleness to her little brother, for whom she holds incestuous feelings.

She believes that everything around her is fake, especially the feelings of others. People in relationships only take and never give, and the only exception lies in her feelings for Seiji.[1] Her twisted love for him is displayed at varying points in the series, as she goes to insane lengths to protect and support him no matter what the cost may be to her and the people around them.

While she has been shown to be somewhat physically capable, Namie's real strengths lie with her intellect. Namie is shown to be adept at manipulating others and turning the situation in her favor, even catching Izaya off guard at times. Her extensive knowledge of medicine also makes her extremely proficient with poison. Unfortunately, Namie is prone to letting her emotions get the better of her. This, combined with her arrogant nature, causes her to underestimate those who would pose a significant threat to her, such as Mikado Ryugamine and Mika Harima.

Before Seiji was born, Namie was frequently sent to her uncle Seitarou Yagiri's home. One day, he returned home from a foreign country and showed her a beautiful head - Celty Sturluson's head. At first, Namie thought it was a doll until she touched it and felt that it was warm and realized it was alive. Around the time Seiji was born, their mother and father made a grave mistake with their clients and were laid off from their jobs. In their struggle to get their lives back on track, they ended up neglecting their two children. Namie took on the responsibility to look after her younger brother - the one she loved more than anything in the world - from then on. As Namie lacked any kind of love or attention from the rest of her family, she began to seek that love from Seiji, causing her to develop an unnatural attraction to her brother.

Years later, Namie and Seiji were taken in by their uncle, who only agreed to raise them as potential assets for the future. During their time with their uncle, Namie eventually decided to show Seiji the mysterious head he kept in his study. Unbeknownst to Namie at the time, Seiji began to grow steadily more obsessed with the head, asking more and more frequently to see it. Eventually, he admitted to his sister that he was in love with it.

As the years went on, Namie would excel at her studies, particularly in science and medicine, to the point where her uncle made her the head of one of his research teams. Namie would eventually request to research the head, partly out of genuine curiosity but also out of a desire to keep it out of Seiji's reach. Seitarou agreed and allowed her to take custody of the head.

While working, Namie receives an emergency call informing her that the head has been stolen. Namie quickly narrows down the list of suspects and deduces that Seiji is the most likely culprit. Just as she reaches this conclusion, she receives a call from her brother, who tells her he might have killed someone. Happy and relieved that Seiji is relying on her, Namie rushes to his apartment and orders a few of her employees to remove the unconscious body of Mika Harima. Namie locates and reclaims the head and comforts Seiji, promising to take care of everything.

After Mika Harima regains consciousness, Namie strikes a deal with her, offering to let her undergo plastic surgery to look like the head Seiji loves. In exchange, she has to take drugs and other modifications to erase her memories and alter her personality, effectively making her a doll for Namie to use to pacify her brother. While Mika initially cooperates for the surgery, she manages to escape before they can administer the drugs.

Namie has Yoshida and his men search the city and eventually tracks Mika to Mikado Ryuugamine's apartment. By the time her men arrive, however, Mika has already fled due to a warning from Izaya Orihara. As Namie tries to figure out her next move, she receives a sudden call from Mikado, asking for a direct meeting on the street. Namie agrees and confronts Mikado on Sunshine 60 Street, bringing a few of her men along. Mikado attempts to convince Namie to turn herself into the police and admonishes her for her deplorable actions in trafficking and experimenting on humans. Namie simply laughs off his criticisms and signals for her men to take Mikado by force. Anticipating this, Mikado quickly sends an email to all Dollars members who had gathered in the area, causing the entire street to erupt into a mass of ringtones going off simultaneously. Namie and her henchmen suddenly find themselves trapped as the crowd turns all of their attention on her, giving Mikado the perfect opportunity to escape into the mass. As Namie looks on in confusion, Celty suddenly rides down the side of a nearby building. Namie's men attack Celty, knocking her helmet off in the process and revealing her true nature as a Dullahan. As the crowd erupts into confusion, Namie makes a hasty retreat back to her office.

Namie retrieves the head and goes to Izaya Orihara for help. Izaya agrees to take custody of the head, telling Namie of his plans to use it to ascend to Valhalla. Namie scoffs at his ideas while Izaya offers to take her to Heaven with him.

Namie plays a minor role during this arc, appearing as Izaya's new secretary in exchange for protection from the police. She silently listens to him talk about the demon blade Saika and occasionally offers him spiteful comments.

When Namie comes in for work, she is held at gunpoint by Shingen Kishitani and is angry and embarrassed when she discovers that the gun is a toy. She threatens to sue him for harassment, but Shingen is quick to point out that attempting to sue him would only land her in jail as well.

At some point, Namie goes behind Izaya's back and reveals Mikado's status as the Dollars leader to Horada, worsening the conflict between the gangs in the city. Afterward, she is shown laughing in amusement at the black eye Izaya receives from Simon.

When Izaya points out that Seiji is starting his second year of high school, Namie brings up Izaya's younger sisters Mairu and Kururi, who are starting their first year, and listens in amusement to Izaya's discomfort as he explains their personalities. Sometime later, she invites them into the chat room without Izaya's knowledge.

A few days later, Celty and Shinra invite everyone except Izaya to a hotpot party, and everyone in the chat room logs off. Izaya asks Namie if she wants to have a hotpot party of their own. She simply brushes him off, telling Izaya not use her to heal his wounded ego because he lacks real friends to have a party with. In the end, however, Namie caves in to Izaya's prodding and ends up cooking for the both of them. She also contemplates poisoning the food but decides against it.

Through a flashback from Akane, the details on how Izaya manipulated her were revealed. When Izaya agreed to meet Akane as "Nakura" he had Namie appear at the meeting in his place. Namie then introduced an impostor as Izaya and her colleague and they proceeded to gain Akane's trust over the next several days. Namie, the imposter, and Akane would usually spend these days at Manga Cafe's or at family restaurants (almost like actual parents) with Akane staying at Namie's place when she had to rest. Eventually, Izaya put his actual plan into motion and manipulated Akane into attacking Shizuo.

After Izaya had been stabbed, Namie is seen, once again, cooking dinner for them and making a comment on how Izaya was later than he usually was.

Upon seeing news of Izaya's stabbing, Namie simply takes it as a sign of having several days off. She hires Mairu and Kururi to spy on Seiji and Mika and report on their relationship, growing steadily more angry as the twins describe their findings. Namie decides to undo the plastic surgery on Mika and calls Shinra to ask if he could meet her at a specific warehouse and reverse it. When Shinra declines, she takes matters into her own hands.

Namie calls Mika and lures her into a nearby warehouse that used to be owned by her company. The meeting quickly turns violent as Namie hunts Mika throughout the warehouse. Namie gains the upper hand and pins Mika to the ground, using a special drug to paralyze her. Namie kisses Mika, taking it as an indirect kiss with Seiji. She then attempts to scar Mika's face using a special acidic chemical. However, Mika stops her as she reveals she had been spying on all of the people relevant to Seiji's live such as Mikado, Anri, and even Izaya himself. While impressed by her information gathering skills, Namie still attempts to open the bottle until Seiji intervenes directly, having gained their location from Shinra. Seiji then kisses Namie himself in an attempt to show her that doing so without another's permission is wrong but it appears to have the opposite effect. Flustered, Namie runs home to cool herself off, overjoyed at sharing her first kiss with Seiji, not realizing he had blocked their lips with his finger when he did so.

Namie is seen along with several others at the hotpot party Izaya holds after he invites several new 'friends' that he has made.

Namie is seen at the end cooking dinner for Izaya once again. Unbeknownst to her, Izaya is sneaking up on her and about to shove a potato sack over her head.

Namie encounters her uncle and Jinnai Yodogiri's secretary. The two of them have a brief struggle which ultimately ends in Seijirou and Kasane's favor, but Namie is saved by Shingen's, Eijiro's and Egor's intervention. She is then taken to Celty's apartment.

She joins a group started by Walker and Shingen at Celty's apartment.

A year prior to the main stories events, she is contacted by Kuon Kotonami who is interested in learning more about Izaya. In Prologue B of Durarara!! SH, Mairu mentions that Namie has traveled to America. It is revealed that she now works for Nebula in America and brought Celty's head to America to study it.

She gets a call from Izaya after the events that transpire in Bunokura and is explained all the details that went down between the two families and the aftermath. Later that same summer, Namie notices a change in Celty's head during her usual work routine but brushes it off, thinking it was her imagination. 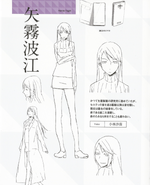 Namie as a child