Mika Harima (張間 美香, Harima Mika) is a friend of Anri Sonohara's who disappears just prior to the series' start. Mika had been stalking Seiji Yagiri until he nearly kills her, after which she vanishes and is presumed dead. When she returns to Raira Academy, she becomes Seiji's girlfriend and continues to be a distant friend of Anri's.

Originally, Mika had brown hair and eyes, but after surgery, she has lighter brown hair and grey-green eyes along with much paler skin. Her usual street clothes consist of a white collared shirt, a pink skirt and tie, and a white hat with a pink heart on it.

Normally, she is hyperactive, cheerful, and obsessive. As evidenced by her relationship with Seiji, Mika is very possessive of the person she loves and will go to great lengths to gain their affection, even to the point of invading their privacy. She was even willing to abandon school and even her own identity for Seiji's sake. While most would be quick to write Mika off as a stalker, Mikado states that it is not entirely accurate. While Mika does exhibit typical stalker tendencies, all of her actions have been taken out of a genuine love for Seiji, as opposed to most stalkers, who only act out of selfish desires. Mika is shown to be very caring toward her friends, as she is worried about Anri during the Yellow Scarves incident.

Mika is shown to be very skilled with tools, seen when she is able to break into Seiji's apartment and later set up several wiretaps and cameras in several people's apartments. She is also regarded as the best cook among most of the female cast.

Mika is from a rich family. She was Anri's best friend during middle school and the two were often seen together. One day, they were being accosted by a group of thugs but were saved by Seiji Yagiri. This caused Mika to develop an instant crush on Seiji, and she began stalking him. Mika eventually breaks into Seiji's apartment while he is out and finds Celty's Head. When Seiji returns, he attempts to kill Mika by slamming her head against the wall, but she manages to survive. When she wakes up on an operating table, she greeted by Namie Yagiri, Seiji's older sister, who explains the situation between Seiji and his love for the head. She proposes that Mika get plastic surgery to look like the head and to take memory altering drugs so that Seiji would love her. Mika agrees to the surgery and learns from Shinra that the head's name is Celty and that she should use that name when talking to Seiji. While Mika completes the surgery, she refuses to take the drugs and escapes.

Mika bumps into Mikado on the street the day he comes to Ikebukuro. He notices a mysterious scar around her neck before she runs away. While walking around the city, Mika is later mistaken for her old self from behind by both Anri and Mikado, but both back off after seeing her new face and believing her to be someone else. She is eventually found by Seiji, who lovingly calls her "Celty." She and Seiji are shown spending time together in various areas of the city.

Mika is shown secretly receiving texts from an unknown sender. She dislikes Seiji's communication with his sister, Namie, on whom he is financially dependent, and she throws his phone into a fountain. One day in the city, she tries to get Seiji to run away from his sister's surveillance, but the Headless Rider sees her and chases after her to get a better look at her face. While running away, she bowls Mikado over and asks him to save her in a panic. Mikado runs with her and brings her to his house. He offers to bring her to the police, but she refuses. The next day, she is left in Mikado's apartment alone while he goes to school but gets a call from Izaya Orihara while she is waiting. He explains that she is going to be discovered soon, so she runs into the street, only to almost get run over by Saburo Togusa. He stops the van in time, and Kyouhei's gang sits on a bench with Mika and listens to her story.

Later that night, Kyouhei Kadota, at Mikado's request, brings Mika to meet Celty. When Celty asks what Mika's name is, Mika introduces herself as Celty as well. Celty realizes that Mika does not have her head after all and screams in frustration. After the Dollars meeting, Seiji attacks Celty with a taser, making her fall to the ground, and retrieves Mika from Saburo's van. As the two walk away, Seiji encounters Mikado, and he thanks him for reuniting them. However, when Mikado brings up Mika's "death," Seiji pulls out a knife and attempts to stab him. Celty protects Mikado and attacks Seiji, but Mika interferes by jumping in the way and finally revealing that she is Mika Harima. She explains everything that happened to her after Seiji nearly killed her, including the plastic surgery Shinra performed, stating that despite nearly dying by Seiji's hand, she still loves him. As Seiji falls down in disbelief, Mikado remarks that, in a way, Seiji and Mika seem to genuinely care for each other and that they show their love in similar ways. Mika and Seiji return to school the next day with Seiji professing that he will accept Mika's love until he finds the real head because she looks like the head he fell in love with as a child.

Mika plays minor roles during both of these arcs, only appearing to offer cautionary advice to Anri about Takashi Nasujima. She also gets worried about Anri's behavior during the growing tension between the Yellow Scarves and the Dollars and asks Mikado about her.

Mika and Seiji attend the hotpot party held by Shinra and Celty. She assists Celty, Emilia, Anri and Erika with the cooking and reminds everyone to thank Seiji since her cooking skills only exist for him.

Namie attempts to undo the plastic surgery done to make Mika look like Celty's head. Realizing what this would do to her and Seiji, she threatens Namie with the extensive amount of evidence she managed to gather about her and Izaya's activities. Mika states that she obtained all this information by bugging the house and the phones thoroughly, although Izaya noticed it easily.

Namie asks why she found out so much about not just her and Izaya but about Mikado, Shizuo, Anri, and everyone else and why she never did anything to stop it if she knew what Izaya was planning. Mika states that while she never did anything to help Anri or her other friends, she did what she could to keep Seiji out of harm's way. She explains that, despite his harsh nature, Seiji does feel guilty about almost stabbing Mikado during the Dollars meeting and would even try to help him if he found out about what was going on. Mika made sure to keep Seiji oblivious to what was happening so that Seiji would not put himself in danger.

During the events of the arc, she reveals her intentions to eat Celty's head.

After hearing she and Seiji are going to be kidnapped, they go to Celty's apartment. 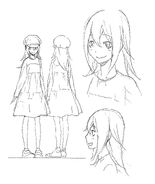 Character sheet of middle school-aged Mika from the Durarara!!x2 Shou episode 4.5 bonus booklet
Add a photo to this gallery

Full-body illustration from vol. 7 and Shooting Star Bebop
Add a photo to this gallery
Retrieved from "https://durarara.fandom.com/wiki/Mika_Harima?oldid=35501"
Community content is available under CC-BY-SA unless otherwise noted.