Kisuke Adabashi (徒橋喜助, Adabashi Kisuke) is a former member of the Dollars and one of the main antagonists of the eighth light novel. When he first appears, he is working under orders from Jinnai Yodogiri in an attempt to recapture Ruri Hijiribe. He and his henchmen terrorize Ikebukuro for several weeks before they are finally stopped by Mikado.

Kisuke is tall and thin. He has sharp teeth and his hair is shaved in a buzz cut. Although he is stronger than he looks, his strength does not exceed that of a normal human. In his few appearances, he was shown to be wearing a loose, sleeveless shirt with shorts.

From the very beginning, it is made clear that Kisuke is a sadist. This is primarily shown via his twisted love for Ruri Hijiribe. He shows his love by destroying her image or objects that display her image (i.e. posters, billboards, etc.), and hurting those close to her. That being said, Kisuke is also a coward. If it is evident that he is outmatched then he will automatically move on to a much weaker target, such as the case with Celty: Kisuke knew he had no chance against her, so he opted to go after Shinra instead.

Kisuke was the son of one of Ruri Hijiribe's sponsors. He witnessed her kill his father and fell in love with her.

Under orders from Jinnai Yodogiri, Kisuke and several others are charged with kidnapping Ruri Hijiribe for a then unknown purpose. Adabashi manages to burn down Ruri Hijiribe's house which forces her and Kasuka Heiwajima to go into hiding in Ikebukuro. Using a combination of the Dollars information network and Yodogiri's information, Kisuke and his cohorts tear through Ikebukuro looking for Ruri and Kasuka.

His actions eventually attract the attention of Mikado and Aoba who decide to make Kisuke their next target in their campaign to "cleanse" the Dollars. After a bit of digging, Mikado realizes that Adabashi is targeting those who are related, even by the tiniest bit, to Ruri Hijiribe. Since Shinra was seen exiting Kasuka's apartment the night he and Ruri were revealed to be a couple, Mikado and Aoba try to warn Celty and Shinra of the possible danger. The warning comes too late, however, as Kisuke breaks into the apartment while Celty was out and proceeds to torture Shinra mercilessly. He breaks multiple bones in Shinra's body before leaving him unconscious on the floor.

Kisuke eventually learns, through the Dollars website, where Ruri Hijiribe is located. He and his henchmen eventually corner Ruri in an abandoned parking lot. As Kisuke moves closer, the blue squares ambush him and his men and a fierce brawl ensues. Kisuke then turns to Ruri who suddenly removes a wig to reveal Mikado's face. Mikado had leaked a false rumor about Ruri's location on the website and dressed as a girl to lure Kisuke into a trap. He then states that Kisuke's membership in the dollars has now been officially revoked. Kisuke responds by severely beating Mikado who was practically defenseless since everyone else was focused on dealing with Adabashi's henchmen. Before Kisuke can finish Mikado off, however, Masaomi enters the fray and manages to subdue Kisuke. Without hesitation, Mikado gets up and lights Kisuke on fire as punishment for what happened to Shinra. Kisuke runs screaming into the night in an attempt to find some water. He later encounters Ran Izumii. While it is not shown, it is implied Ran broke his leg and knocked him out.

Near the end of the novel, Kisuke is shown to have survived but somehow managed to break his leg after his encounter with Mikado. He is then taken to Izaya's apartment along with several others who decide to join forces with the information broker.

Toward the end of the series, it is revealed that he has since then been kept in confinement. He finally manages to escape by the end of the final volume, and proceeds to try to run over Ruri with a stolen van. Ruri is rescued by Kujiragi and Adabashi is beaten and taken to the police.

Kisuke is absolutely obsessed with Ruri. He attempts several times to kill Ruri and tries to kill Mikado because he is a similar build to Ruri. He also tried to kill Masaomi, simply because Ruri would be sad that a stranger died because of her. 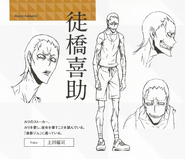 Character sheet
Add a photo to this gallery
Retrieved from "https://durarara.fandom.com/wiki/Kisuke_Adabashi?oldid=34575"
Community content is available under CC-BY-SA unless otherwise noted.