Volume 6, Epilogue and Next Prologue
Jinnai Yodogiri (澱切 陣内, Yodogiri Jinnai) was formerly the head of Yodogiri Shining Corporation, the talent agency employing Ruri Hijiribe. He is known to be a skilled and dangerous information broker; in reality, however, the real Jinnai Yodogiri died several years prior to the start of the series, and the current Yodogiri is one of many decoys acting under his name. They are led by Yodogiri's protege, Kasane Kujiragi, who has numbered more than twenty decoys, with the face of the name being Yodogiri Number One. While they act as puppets and their accomplishments are actually Kasane's, this is unknown to the public, and Yodigiri is wanted by both the police as well as the Awakusu-kai but evades capture every time.

While the original Jinnai Yodogiri passed away before the events of the series, the decoys using his name are all elderly men. It is believed that Jinnai Yodogiri receives plastic surgery regularly to avoid his pursuers; in fact, the entity known as 'Jinnai Yodogiri' is at least twenty-four individuals using the name who operate both the Yodogiri Shining Corporation talent agency as well as all of Yodogiri's side ventures. They all appear to be greying, but otherwise their features differ: some wear glasses, some have age spots, some are slimmer, and some are rounder.

Little is known of the original Yodogiri except that he was a successful talent agency head with strong ties to the underworld who purchased Kasane Kujiragi as a baby and raised her to know all the tricks of his trade. The men currently claiming the name Yodogiri are a conniving group of con artists willing to perform cruel and manipulative acts under Kasane's orders to achieve their goals. While they are controlled by Kasane, they sometimes act without her approval or awareness, as when they killed Ruri Hijiribe's father. While no one is aware of the truth of the Yodogiri doubles' existence except for Kasane, those who do know Yodogiri best know to be wary of him. Shingen Kishitani compares him to a radioactive substance: those who get near him slowly start to decay before they even realize they have been affected, and by the time they do, they are already doomed to die.

Very little is known about Yodogiri's past, but he is responsible for selling a branch of the demonic blade Saika to Shingen Kishitani and convincing him to steal the dullahan Celty Sturluson's head, though his motives are unknown. More than ten years later, he manipulated Ruri Hijiribe into trusting him, had her father murdered, and abused her for many years, leading her to later go on a serial killing rampage through Ikebukuro.

Yodogiri and his accomplices are the targets of the serial killer Hollywood. He abandons his facade as a talent agency head and goes into hiding. He is mentioned by several members of the Awakusu-kai who are also searching for him.

In another scheme of his, Yodogiri hires Russian assassins Vorona and Slon to kidnap Akane Awakusu, the granddaughter of the head of the Awakusu, for an unknown purpose, but his plans are thwarted when Akane unexpectedly comes into contact with Izaya. Izaya uses Akane to try to kill Shizuo Heiwajima, which complicates the mission and causes its failure.

Yodogiri realizes that Izaya had sent Masaomi Kida and Saki Mikajima to dig up information on him. To keep from being found, as well as to get back at Izaya for thwarting his plans, he calls Izaya on his cell phone and verbally taunts him for several minutes before approaching and stabbing him in the stomach. He leaves Izaya bleeding on the sidewalk and disappears before anyone can notice him. While he gives his name to Izaya over the phone, Izaya does not disclose this information to the police.

Yodogiri sends a man named Kisuke Adabashi to go after Ruri. His plans are thwarted this time by Mikado who lights Adabashi on fire and sends him screaming into the night. It is revealed at the end of the novel that Yodogiri is working very closely with Seitarou Yagiri, the uncle of Namie and Seiji. Their main goals are:

He mentions that had hoped Celty would go on a rampage after Shinra was attacked.

He sends Slon after Izaya to finish him off. It is also revealed that Jinnai Yodogiri is actually an identity used by a group of people as opposed to a single individual. The original Jinnai Yodogiri died several years ago but his identity was still being used by his "secretary", Kujiragi, for her own purposes. He is hit by a car. 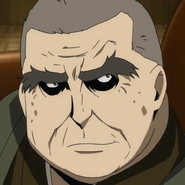 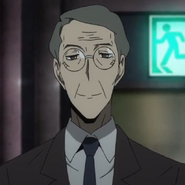