Erika Karisawa (狩沢 絵理華, Karisawa Erika) is a member of the Dollars and can usually be seen driving around the city with her friends Walker Yumasaki, Saburo Togusa, and Kyouhei Kadota. She and Walker are incredibly close due to their both being otaku, people obsessed with anime and manga. Erika is also a cosplayer and a fujoshi, a fan of romantic male relationships in manga and novels.

Erika has brown eyes and brown hair. Her hair is typically worn a braid along the back of her head, with two pieces of her hair hanging freely in front of her ears. She wears a black newsboy cap and a long-sleeved, black cheongsam with black ankle boots. She also carries a small, silver slash bag.

Erika is an anime and manga fanatic, becoming extremely enthusiastic about anything anime or manga related. She is a yaoi fan, and is convinced that Shizuo Heiwajima and Izaya Orihara are lovers, despite (or because of) their constant fighting. Her personality can come off as being hyper and strange, but she proves in episode 20 that she can be calm and can reason with people, although she goes right back to being her normal otaku self immediately after the topic changes. In the manga, Masaomi explains to Mikado that she and Walker are a bit peculiar, but good people. Like Izaya, she calls Kadota "Dotachin" as a playful nickname.

Erika and Walker have darker sides of their personalities as they are skilled in both mental and physical torture, displayed whenever the two need to extract information from someone. During interrogation, the torture they conduct is usually based on themes from a manga or anime series of the victim's choosing. Both Erika and Walker share the mentality that they were twisted from birth and that their affinity for torture would persist even if anime didn't exist. Despite her sadistic tendencies, Erika still values her friends and companions deeply and will do whatever she can to protect them.

Very little is known about Erika and Walker's background before the start of the series. It is implied by Kyouhei that he met them when they were still involved with other criminal organizations and acted as interrogators. Kyouhei somehow managed to turn them away from a life of crime and helped them (mostly) re-adapt back into normal society. The two of them developed such a strong connection to Kyouhei that they were ready to quit the Blue Squares in a moment's notice when Kyouhei grew sick of the group despite the risk of retaliation. Not long after, they followed Kyouhei in joining the Dollars.

She and Walker meet Mikado on his first day in the city. The next day, the gang meets up and Erika suggests eating at Russia Sushi. As they leave, Kyouhei gets a text from Kazutano, saying that he broke a plate. Erika wonders if Kazutano messed up his kanji and meant to say he had been kidnapped, but the group found this unlikely and ignores the message.

After eating at Russia Sushi she and the others go to Kazutano's apartment to find the place is a wreck. Saburo deduces that he was kidnapped, to everyone's distress. After spending some time searching for Kazutano, Erika suggests calling him. Kyouhei does so, but hears Izaya on the other end informing them of the location of one of the kidnappers.

They go to the place to find Kanazawa sleeping. Erika and Walker suggest torture, but Kyouhei manages to trick the other kidnappers into revealing their location, and they celebrate. Shortly after being tracked down, the kidnappers leave Kazutano and run away from the Black Rider. Erika jumps back in the van with Kazutano and the others and chases them down. Morita gets away, but they manage to corner Asanuma.

In the back of the van, Erika and Walker pull out several manga volumes and tell the kidnapper to choose one. Erika hands Walker a mirror from her purse and holds Asanuma down as Walker moves to the place a broken mirror shard in Asanuma's eye, but Kyouhei stops them when the kidnapper agrees to talk.

A couple of days later, the group nearly runs over Mika Harima. They sit with her and notice messaged on the Dollars site about the girl. As Mika explains her situation to them, they receive emails about the Dollar's meeting. Erika and the others attend the gathering, viewing the proceedings from inside the van, and marvel at how large the Dollars has become. While everyone else shows fear and confusion, Erika and Walker are excited when the Black Rider rode down the side of a building.

After several slashing incidents, the group has begun driving around town looking for the slasher. Erika is with the others when they hit Shuuji Niekawa to save Anri Sonohara. Shizuo and Celty intervene and incapacitate him, and when Shizuo gets bored and leaves, mentioning his intent to kill Izaya, Erika becomes excited, saying that Shizuo likes Izaya, which everyone immediately and fearfully denies.

The next day, after interrogating him, the gang releases Shuuji, as he claims to not remember anything.

Masaomi finds the group in the city and takes them to a private room in Russia Sushi, where he asks them about rising gang tensions and the Blue Squares. Erika and Walker do not give him any straight answers, pointing out Masaomi's temper and mistakes. As the talking gets more intense, she and the others are startled when Denis throws a knife into the room and tells them that their talk is scaring the customers. Outside, she fantasizes that Denis is a former Soviet spy.

Not long after, Erika and Walker are left out during the fighting between the Dollars and Yellow Scarves, as according to Kyouhei, they would "stand out too much." They take Masaomi to Raira General Hospital and are later seen sleeping in his hospital room.

Mikado and Anri turn to Erika and Walker for help in regards to giving Aoba a tour of Ikebukuro since neither of them are very good at showing people around. Erika and Walker try to give them some good tips and even make a list of what they consider some of the more interesting sites around the city but decide that it would be simpler to just come with them. After singing anime-themed karaoke for a couple hours, the four of them part. The next day, Erika, Walker, and Kyouhei save Mairu and Kururi from some Toramaru members and call in Saburo to pick them up.

The six are chased by Toramaru and eventually pick up Mikado, Anri, and Aoba as well. After meeting with Celty along the way, Celty relays her plan to Kyouhei to hold off the bikers until the van group can get the high schoolers to safety. Saburo drops the teenagers off at a police station, and Walker and Erika have to forcefully eject Mikado from the van, as he wants to stay with the other Dollars members. In the anime, Walker and Erika are left behind with the high schoolers. When the group arrives back under the overpass, they join Celty in watching as Ruri and Egor incapacitate the Toramaru members that were chasing them.

Several days after the incident, Erika, along with Celty, Emilia, Anri, and Mika, assist in the cooking for a hotpot party at Celty and Shinra's apartment. The color illustrations in the fourth light novel rate the girls' cooking skills, with Erika scoring an even 70 out of 100, claiming she can easily make anime-themed dishes.

Erika and the others are hanging out but Kyouhei notices Chikage following them. Erika's presence in the group is the only thing keeping Chikage from acting (due to his "no harming women" policy) and Kyouhei tells her and the others to separate.

Near the end of Kyohei's and Chikage's fight, Erika, Walker, Saburo and several other Dollars members show up to give them a helping hand with her and Walker in charge of getting the girls to safety. After Anri and Vorona enter the fray, they witness Anri's prowess with a Katana and immediately think of the Anime "Shakugan no Shana". After the fighting dies down, Erika starts asking Anri about Saika and even begins trying to search Anri's person for where she keeps Saika hidden.

Kyouhei manages to pull her off of Anri who decides to go look for Mikado.

While she is hanging out with her cosplay team, Erika sees Anri near a bookstore and calls out to her. Erika introduces Anri to one of her friends named Azusa Tsutsugawa who occasionally hangs out with her and the van crew as well. She mentions how Anri should take up cosplay but Anri is less than enthusiastic.

Erika is first shown in this arc talking to Anri about her relationship with Mikado and cosplay. Then Erika mentions Masaomi's return to Ikebukuro. While they were talking Erika gets a call from Kyouhei's father. Kyouhei's father informs her that Kyouhei was in a hit and run.

She, Anri, Walker, and Saburo arrive at the hospital and find that Kyouhei is alive but in critical condition. Walker and Saburo go to investigate who attacked Kyouhei while Erika stays behind at the hospital. Anri stays with her and tries to comfort Erika as they wait for Kyouhei to recover.

After hearing that Kadota's surgery went well she calmed down and told everyone that Kyouhei was okay. Near the end of the Arc, Erika smiles as she swears that she'll kill the person who did this to Kyouhei.

While Erika and Anri are still waiting for Kyouhei to awake in the hospital, Izaya approaches the girls as Anri was preparing to speak to Erika about Saika. Anri confronts Izaya about Mikado and Masaomi’s situation only for Izaya to turn the conversation into a verbal assault on her. When Anri approaches tears, Erika grows serious, cutting the other two’s conversation off and stating she’ll solder Izaya’s eyelids shut if he makes her cry. Once Izaya leaves, Erika consoles Anri and forgives her for any wrongs she might have previously committed.

After Kyouhei escapes from the hospital, Erika leaves on her own to search for him, but gets caught up in the horde of Saika children swarming around Tokyu Hands. Left cornered, Erika puts on the red contacts she had for cosplaying purposes and imitates the Saika children in order to blend in to the crowd and avoid being slashed. While making her way through the mob, Erika overhears Takashi Nasujima's orders to seize Mikado and Kujiragi, and she leaves in an attempt to warn them. Afterwards, she heads in the direction of Shinra’s apartment and reunites with the rest of the van gang. Seeing her red eyes, Walker runs out to restrain her while Anri prepares to cut Erika with her own Saika and relinquish her friend from the other user’s control. Erika hastily explains the situation, and the two stand down. After Izumii and his lackeys attack the van on its way to Tokyu Hands, Erika stays behind with Walker, Kyouhei, and Saburo to hold off the delinquents while the rest of the passengers escape.

In Durarara!! SH volume 3, the perpetrator to a series of serial assaults is said to be seen attacking civilians while dressed as a character from a multimedia series that Erika and Walker are fans of. Angered that the criminal is ruining the reputation of the series, the duo commission Snake Hands to find the suspect and bring him in for a "little talk." When meeting up with Kuon and Yahiro to discuss the details of the case, Erika is intrigued by their friendship and begins shipping the two. 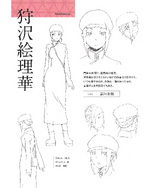 Season two character sheet
Add a photo to this gallery

Retrieved from "https://durarara.fandom.com/wiki/Erika_Karisawa?oldid=36733"
Community content is available under CC-BY-SA unless otherwise noted.