Volume 9
Earthworm (ミミズ, Mimizu), is the former leader of Amphisbaena who ran an illegal gambling parlor. She is one of two major antagonists featured in volume 9 and in the sequel Durarara!! SH.

A well-endowed woman in her twenties, Earthworm has mid-length blonde hair and a slender build. She is seen wearing revealing clothing that emphasizes her breasts.

Although she tries to keep a calm and collected demeanor, when the right buttons are pushed, Earthworm reveals a much more manic mentality due to her obsession over a former classmate of hers. When backed into a corner, she panics easily and constantly pleads with a non-existent "owner" to help her. She is shown to be somewhat capable in a fight.

In the past, Amphisbaena was a group that was founded by Izaya Orihara and another student named Nakura during their high school years. Like its present version, the group also ran an illegal gambling ring but on a much smaller scale than what Earthworm uses it for (the players placed bets on baseball games much like how people placed bets on horse races). Izaya and Nakura used false identities while they managed Amphisbaena and Earthworm was one of the people they used to represent them. After Izaya and Nakura cut off all ties to Amphisbaena, Earthworm took control of the group herself and eventually turned it into a full blown gambling parlor. She seemed to have a strange obsession with Nakura and believed herself to be his lover.

When Earthworm took over Amphisbaena, she made it seem like Nakura (who used the alias "Lizard" when he and Izaya were still in charge of the organization) was still in control, most likely to use him as a sort of scapegoat if things went sour. She frequently refers to Nakura as "Owner," which further cements her strange obsession with him.

Amphisbaena had grown to a larger organization (mostly made up of women) than it had previously been. Eventually, their actions began to encroach on the Awakusu's territory which prompted immediate retaliation. The Awakusu executive Shiki sends Izaya Orihara to gather information on Amphisbaena as a last ditch attempt to avoid a full on gang war.

Earthworm takes note of Izaya's actions and sends her subordinates to corner and capture him. Izaya is then bound to a chair and has a potato sack tied around his head. Earthworm tries to get Izaya to reveal what he knows but gets only silence. She brings up the prospect of torturing Izaya's sisters to get him to talk but she is soon interrupted by another unexpected guest.

A man named Shijima who is the leader of another group called "Heaven's Slave" along with several other thugs barge into the room with the intent of killing Izaya where he sat. Earthworm asks how he found out about their locations and Shijima explains that his men managed to steal information about her from Izaya's laptop. As Earthworm and Shijima argue over what to do with Izaya, Earthworm gets a sudden call from her cellphone. When she answers, the voice on the other end introduces himself as the real Izaya Orihara.

Earthworm is initially dismissive of his claims until the "Izaya" on the phone begins to imply that the man they have in the chair isn't just the wrong man but is actually Earthworm's "Owner." Unable to contain her fear and her curiosity, Earthworm loosens the ties on the potato sack around Izaya's head when even more people barge into the room.

Earthworm and Shijima are then faced by Mikage Sharaku, Ran Izumii, and several members of the gang Dragon Zombie. Ran reveals himself to be the Izaya on the phone while the man in the chair somehow manages to shake off the ropes that bind him and pulls off the potato sack to reveal none other than Izaya himself. Izaya explains that he had allowed himself to get kidnapped and had purposefully leaked some of his information in order to lure the two groups he was investigating into a corner.

Earthworm tells her subordinates to kill Izaya and his allies, but they refuse to respond. Earthworm takes a closer look and sees that their eyes were glowing red, indicating that they are under the control of Haruna's Saika. Out of desperation, Earthworm attacks Izaya but is easily incapacitated by Izumii. After Shijima and his men have been dealt with, Izaya orders Haruna to use Saika on Earthworm to force her to join him. Although it isn't explicitly shown, it is assumed that Earthworm along with Amphisbaena is now under the control of Haruna, and by extension, Izaya.

She frames Shizuo for assaulting her.

Earthworm allies with Shijima in his plan to destroy Ikebukuro. 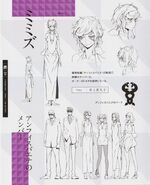