Devil Survivor 2: Record Breaker is a port of Devil Survivor 2. Characters in the Devil Survivor series were designed by Suzuhito Yasuda, illustrator of the Durarara!! light novels. For a limited time, Celty Sturluson, Shizuo Heiwajima, and Izaya Orihara were available for download in the game via SpotPass, the communication system used to deliver downloadable content to the Nintendo 3DS.

Izaya was available via download between January 29 and February 4, 2015. He appears in the second half of the collaboration event requesting a "knife of this world" as well as a "snack with personality." Upon being given these things, he provides players with the Shady Informant's Knife.

Shizuo was available for download from February 5-11, 2015. Upon completing various quests for him, players can receive Ikebukuro's Strongest Man Sign, a melee weapon shaped like an uprooted street sign. Shizuo's outfit can also be acquired by the player and grants them a unique skill.

Celty was available for download from February 12-18, 2015. She appears early on in the collaboration event. After players bring her various fairy demons, they can receive the Headless Rider's PDA COMP. Her outfit can also be acquired with the helmet unequipped, and female players wearing the outfit appear headless.

Players are able to connect with each other via StreetPass, the 3DS data-exchanging system, in order to share information and boost one of their in-game demons. More information about gameplay and downloadable content is available on Megami Tensei Wiki's page Devil Survivor 2 Record Breaker. 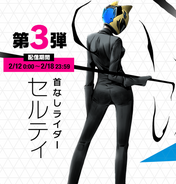